Keeping with my theme of taking back my social media (and knowing I have some Whovians amongst my readers), I have a theory which I am working on regarding the newest companion.

Okay, we all remember this scene, right?

At the end of Series 1 of the newest iteration of Doctor Who, the Doctor sends Rose back to her own time to keep her safe. Rose, however, has other plans and eventually figures out how to get back to the Doctor and save the day, completing a character development arc that spanned the entire season. (A subject for a different post.)

Rose absorbs the Time Vortex (should that be caps?) and flies the TARDIS back to the Doctor. Throughout the entire first series, the words Bad Wolf followed Rose and her Doctor everywhere they went, taunting them with their unknown importance and meaning.

When Rose absorbs the vortex, she realizes she’s the Bad Wolf and scattered the words across all of time and space to lead herself back to that moment. (I keep getting distracted here by the image in the lower right of that collage. Sigh.)

Fast forward a few series and we have a new Doctor. As he travels with his now-married companions (we’re talking Eleven and the Ponds here), our Scooby trio finds themselves sucked into a labyrinthine hotel full of people and terrifying animated inanimate objects.

As the mystery of the hotel begins to unfold, Eleven finds himself at his door. Behind which lies the thing he fears the most, the thing which will cause his deepest faith to surface, so it’s converted to food for the monster lurking in the hallways. What is that thing? We never really know. But I have a theory as to what his faith would be in. Well, it’s not so much a theory as a fact. (Unless we go by Rule #1: The Doctor always lies.)

Remember this episode? (Now we’re re-winding. Wibbly-wobbly, timey-wimey.) When the Doctor gives one of the greatest speeches of the entire program’s new iteration?) When he says that if there’s one thing he believes in, he believes in her? (Whom we assume to be Rose, though he impossibly can never bring himself to express his feelings to the fullest extent.)

So, if Rose is who he has his greatest faith in, that’s what the object in the room in the hotel was designed to bring out. After Rose became the Bad Wolf, she said, “I want you safe, my Doctor.”

What if protecting the Doctor from the false god (the Dalek emperor) was only what the writers wanted us to know in that moment of the episode? What if there’s more we weren’t told, that Rose didn’t tell the Doctor? Because if she saw all that time and space, she’d surely see that someday the Doctor would retreat from the world and stop his adventures to keep his hearts from breaking further?

What if seeing that she left a further extension of herself in all of time and space? Something to lead herself back to the Doctor, to keep him safe, and to protect the world from any more false gods that would rise up? 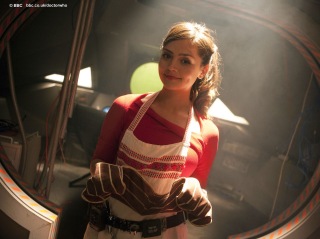 When we first meet her, she’s a mysterious woman making souffles stuck on the asylum of the Daleks.

Throughout the episode she helps Rory and Amy, then the Doctor, fight their way through the asylum.

In the end, what does she do? She disables the Daleks. Oh, and she eternally protects the Doctor from them by erasing all memory of him from their collective species consciousness and records.

She keeps him safe. (Just for emphasis.) 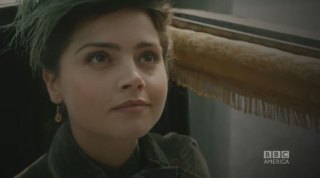 When next we meet her (since she died already at the start of this episode) she’s in Victorian England. Here, she not only gets the Doctor involved, but she also knows the right word to say (subconsciously, since she’s not herself, but an extension of Bad Wolf. More on that below). She protects everyone at the end by sacrificing herself.

She keeps them, and by extension the Doctor, safe. (Again just for emphasis.)

Fast forward to contemporary England. Here, she just happens to get the phone number for the TARDIS’ exterior phone (the phone that never rings, that shouldn’t ring because it’s not hooked up).

Once again she pulls the Doctor from recluse mode. Only this time, it seems to be for good. He’s finally found her through mysterious means and now he’s not going to let her go.

How did she find him? How did he find her? Well, she says the woman in the shop gave her the number. The Doctor is perhaps safest when he’s in the TARDIS, with a companion, saving others. When his life feels like it has a purpose, that the pain he’s endured is far less than the joys he’s experienced sharing his world with others. He’s safest when he has a companion to temper the tendency to Time Lord victorious psychoses.

One lat bit. The name.

First name: Clara. If you can’t read it at the left, the name means “Bright.”

Several definitions of the word.

1. Reflective of light
2. Clear or vibrant
3. Intelligent or quick-witted

I think any or all of these could apply to Clara from what we’ve seen of her thus far in S7.

Middle name: Oswin. According to the image at left, it means “Divine friend; God’s friend.”

(Yes, I realize she made that up herself for her middle name according to “The Bells of St. John.”)

Going back up to the picture from “God Complex” we have to remember that the woman the trio met in the hotel says to the Doctor, “That’s quite the god complex you have there.” (Something to that effect.)

Rose also says she wants the Doctor safe, protected from the “false god” referring to the Daleks’ leader in “Bad Wolf” and “Parting of the Ways.”

For the last reference to gods, we look no further than “The Satan Pit” and the Doctor’s speech regarding his faith in Rose. He mentions having met “gods, demi-gods, and would-be gods.” But Rose is the only thing he believes in.

Thus, the choice of Oswin as a middle name could be meant to hint at her connection to Bad Wolf. (Or god’s friend, if we go with the idea that the Doctor had neared a Time Lord victorious psychosis once more, thinking he’s god of time, and Clara is what pulls him back from that brink.) 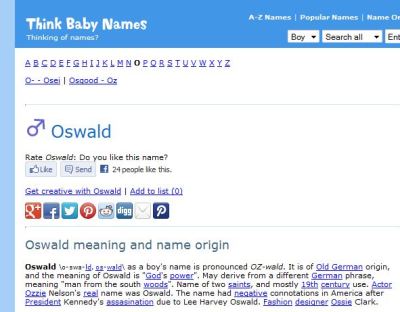 Last name: Oswald. According to what I found online (pictured at left), it can mean “God’s power”.

Well, when Rose absorbed the time vortex, she gained almost god-like abilities. She could see all of time and space, and she could destroy the Daleks with a wave of her hand. Who’s to say she couldn’t set up a long-term way of keeping the Doctor safe when she could no longer help him? Or a means of keeping him from a Time Lord victorious state?

I realize that my theory only accounts for Moffat’s incarnation of Doctor Who, from Nine onward. There very likely could be events in the lives of Doctors One through Eight which would sink my theory. But these are my thoughts and my reasoning and logic behind them.

Not explained yet are how Clara could be in Victorian England and wherever and whenever the events of “Asylum of the Daleks” happened. But I do think the skipped years in Clara’s book will come into play in explaining her appearance in two disparate times and places.