On Cons and Cosplay

These last couple of years, it seems, I’ve been on a bit of a journey to find my nerd zen. This year has and will have some firsts for me.

I’ve only in recent months come to learn what the term cosplay means on a literal level. I saw the term all over the “Geek” board on Pinterest and never dared look it up. This in fear that it would be a euphemism of some sort. Turns out, it’s not.

And cosplay looks like it could be a lot of fun.

It’s been a long-time dream of mine to attend San Diego Comic Con. You can imagine my delight when Salt Lake announced its first annual con. The possibilities were endless. I spent days deciding what to do for my first cosplay. (Because if you’re going to geek out all over the place you might as well do it in style.)

As I approach my first cosplay, I’m now suffering a giant mix of emotions. I am incredibly excited about it. But at the same time, I’m feeling nervous. I’m the queen of random and obscure sometimes. That’s kind of what my cosplay is.

I’m not entering the contest at the comic con I’m attending. This is because I only bought the component pieces of my cosplay rather than make anything from scratch. My sewing skills are not anywhere near good enough to make a cosplay.

I was fine with this, with buying my cosplay, until this week when I watched Sy Fy’s “Heroes of Cosplay.” Watching these people make their costumes from scratch, with amazing technology and tools, I felt like such a poser.

Now I’m worried that I’ll be judged poorly for purchasing the items, for picking something so obscure, for daring to cosplay in the first place. I know it’s silly to think these things, but it’s a worry.

I think part of my worry stems from the “fake nerd girl” wave that I’ve tried to stay out of the middle of. And part of it stems from my apple-to-buffalo comparison of sewing/fabricating skills in comparison to the pros who comprise the cast of “Heroes of Cosplay.” It’s silly, I know, but now instead of being uber-excited for my first con and cosplay, I’m losing confidence.

I love going to author signings. Usually I encounter one or two friends there and get to socialize and talk about all sorts of things. These days, signings are about the only fun thing I get to go do. It does seem like they’re the only event in my social calendar. It’s nice to leave the house for something fun once in a while. (As opposed to leaving to go to the grocery store or to work.)

Last night I went to a signing. It was a nice, quiet evening spent socializing and just generally being away from home. 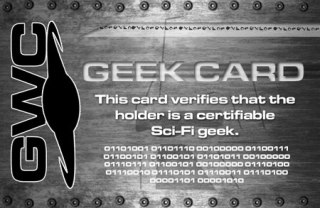 Hello.  My name is Stephanie and I’m a geek.

Actually, I don’t know if you can classify me as such.

Reasons I don’t get to keep my geek card:

~I don’t know how to code or anything like that.
~I’m good with a computer, but only to a certain extent.
~I physically cannot make the “Live long and prosper” sign.
~I don’t get Firefly. I’m trying. But it’s not grabbing me.
~I’ve never seen an episode of BBC’s Sherlock, CBS’ The Big Bang Theory, and most of Doctor Who.
~I can’t identify most of the superhero alphabet, the Star Wars alphabet is hit and miss, and the Sci-Fi alphabet isn’t so hot either.
~I’ve never watched the animated Clone Wars series.
~I’ve never seen the original Star Trek series, the final episode of ST: TNG, most if any of DS9.

Reasons I get to keep my geek card:

~I’m almost through the first season of Doctor Who (2005 season, not the 1970s)
~I know the Ewok’s name is Wicket.
~I don’t buy George Lucas’ explanation for Ewan McGregor’s Obi-Wan becoming Alec Guiness’ Obi-Wan in a mere 16 years
~I miss Frank Oz.
~I have the Star Trek: The Next Generation theme on a CD in my car.
~I still have all my old CDs despite having all sorts of digital music players.
~Greedo didn’t shoot first. Han didn’t give him the chance. (Edited to add that one. :D)